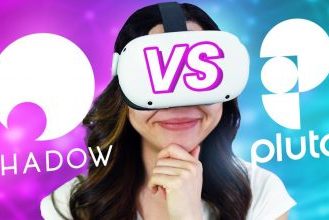 There are currently two cloud streaming services that work with VR and are available to consumers: Shadow and PlutoSphere. These services allow Quest users to play PC VR games without needing a gaming PC, which is a big investment if you’re only looking to play a few SteamVR titles like Half-Life: Alyx.

Cas and Chary VR is a YouTube channel hosted by Netherland-based duo Casandra Vuong and Chary Keijzer who have been documenting their VR journeys since 2016. They share a curated selection of their content with extra insights for the Road to VR audience.

I got curious so I checked out both services to compare the two and see which one is worth subscribing to right now. This article is a summary of my video where I share the key differences, pros, and cons per service. This article also includes more recent developments on PlutoSphere billing.

Shadow focuses more on flatscreen PC gaming via the cloud, VR is a side project and their Quest app is still in beta. PlutoSphere focuses on XR and flatscreen gaming is secondary; this is why PlutoSphere virtual PCs come preinstalled with SteamVR, while on Shadow, you have to configure the VR software yourself. Pluto’s entire service is currently in early access.

Shadow has a monthly subscription fee of US$30 per month. In return, you can use the service unlimitedly (as long as you pay). You can cancel 48 hours before your subscription renews.
Included is persistent storage (256GB) and you can add more storage for an extra fee.

PlutoSphere has time-based billing, so you pay per hour and only when you use it.
You have to buy ‘PlutoTokens’ to get access. Currently, 600 PlutoTokens is priced at $2 and amount to one hour of usage. The more tokens you buy at once, the cheaper it gets.
PlutoSphere does not come with persistent storage included. To get persistent storage, you have to pay a monthly fee. You get two options:

Currently supports Windows, macOS, Ubuntu, Android, AndroidTV, and iOS/ tvOS. As far as I can see, Shadow cannot be run from a web browser, you have to install an app on your device to run it.
Only available in eight different countries. This includes the US, UK, Belgium, France, Germany, Switzerland, Luxembourg, and my own little country, The Netherlands.
In the US, Shadow isn’t available in every state. You can check availability here by choosing your state from the dropdown menu.

Currently supports Android, iOS, Hololens 2, and any device with a web browser. Native Windows support is said to come soon.
Pluto leverages Amazon Web Services, which has servers worldwide, so Pluto is available as long as there is a server near you. If you go to this online tool, you can estimate the network latency from your browser to AWS data centers. As long as there is a server that has less than 100ms ping to you, you can use Pluto. Keep in mind that CloudFront doesn’t count.
For VR, both services support Meta Quest 1 and 2. Other headsets might be coming in the future.

Both services have requirements for your internet connection.

These are the specs that you’ll get on your virtual PC.

Shadow doesn’t have as many initial steps. All you need is to install the Shadow app via SideQuest, then you can launch Shadow from within VR and do everything from there.

On Pluto, there are more initial steps, which are detailed in my how-to video. After these steps, you need to access their dashboard first (on any device with an internet connection). That’s where you can start the service, which can take between 10 to 15 minutes. Lastly, you also need to start SteamVR on your Virtual PC, before you can put on your Quest.

During my tests, I kept both services on default settings, and both were tested in 72hz on Quest 2. I’ve tried playing Beat Saber, Blade & Sorcery, Fracked, and Half-Life Alyx. If you want to see a side-by-side gameplay comparison, you can watch my video.

The streaming quality is good enough on both services to be fully playable. However, there is a difference in visual quality, Pluto is noticeably much sharper, while Shadow has more streaming artifacts.

Unfortunately, Pluto’s software is more buggy and it causes compatibility issues with certain games as you can see from this list. For example, I wasn’t able to play Half-Life: Alyx on Pluto, yet it did work on Shadow.

Input lag is comparable on both services. I wouldn’t recommend using streaming services for very competitive games where every movement counts, but slower-paced games do seem to work well.

In the end, I think that Shadow has the best overall performance with software that’s easy to use without many hiccups, and the games I tried work out of the box. However, PlutoSphere has better stream quality overall, mainly when a game is supported.

Which service is best for you will depend on how many hours you want to use your virtual PC and whether a game is supported. However, overall, I think Shadow is the way to go for now. Keep in mind that PlutoSphere is in early access, so hopefully, they will solve the bugs when it releases.

As you can tell by now, VR streaming can be tricky, but I think it’s incredible that it’s already possible, and having more options for people to get into higher-end VR games is never a bad thing, right?

Disclosure: Both platforms provided me with free access to their service