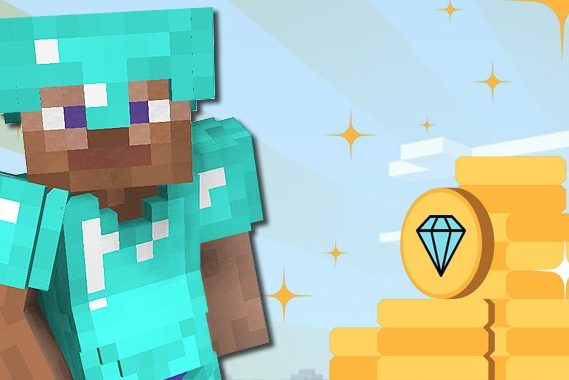 Why do virtual items have value? This is a question that I’ve heard asked countless times by people who can’t seem to grasp why somebody would spend $20,000 on a plot of virtual land or $2,000 on a set of virtual armor. For these people, the concept of spending real money on intangible things sounds ludicrous, but to somebody who grew up playing video games with algorithmic scarcity it kind of makes sense. Let me explain…

Scarcity is undoubtedly an important factor in assigning value to virtual items. For example, when Diamonds were some of the least common raw materials in the video game Minecraft, they were also some of the most valuable.

Diamonds were often used as a store of value by players in online multiplayer Minecraft servers who would treat them like treasure and hoard them in hidden chests. Occasionally, diamonds were used as a medium of exchange when players traded them for other scarce in-game items. I refer to this period in Minecraft’s history as the “age of the diamond standard.”

In the age of the diamond standard, Minecraft diamonds were also difficult to obtain. This is another key reason why they had such great value to players. To begin mining diamonds you first had to spend hours acquiring the materials needed to craft diamond-mining tools. Only after you had the right tools could you embark on a diamond-mining expedition; and even then, you would still have to spend hours mining enough raw diamonds to produce a full set of diamond armor.

Minecraft diamonds also had value because they had great in-game utility. A player with 24 diamonds could use them to craft a full set of diamond armor, one of the most coveted in-game possessions during the age of the diamond standard. Not only was diamond armor the most durable type of armor, but it also offered players the greatest degree of protection from hostile entities.

Wearing diamond armor and wielding diamond weapons statistically increased your chances of survival. If you managed to survive, you would be able to retain your in-game wealth. By using diamond tools, you could even increase your productivity in-game. Much like investing in the real world, putting your (diamond) savings to work was a surefire way to compound your wealth in Minecraft.

Like diamond armor in Minecraft, a full set of rune armor took the cake in Runescape as one of the most desired in-game items. In middle school I would forgo afterschool play time with my friends to fish swordfish a.k.a. “swordies” at Karamja island in Old School Runescape (OSRS).

After hundreds of hours fishing swordies and more trips to the Grand Exchange than I can count, I was finally able to amass enough in-game currency to buy my dream set. Thanks to my new rune armor, I could finally slay some of the most menacing and powerful adversaries in the game and reap the rewards in coin, the native currency of the Runescape universe.

The virtual economies of Runescape and Minecraft had a lot in common. Virtual items effectively served as stores of value because they were algorithmically scarce and difficult to procure. In Runescape I had swordies. In Mincecraft I had diamonds. In both games, I spent an embarrassing amount of time and energy capturing value and storing it in these virtual assets. These kinds of value-capture mechanisms are also present in modern metaverse platforms like Decentraland.

Golfcraft is one of a handful of new and promising play-to-earn games that enable players to capture, store, and exchange value in Decentraland. In Golfcraft, players complete virtual mini golf courses to earn gold coins, the currency of the Golfcraft ecosystem. Coins are both scarce and difficult to procure. They also have in-game utility, making them a good store of value.

Coins can be reinvested into the game for a chance to earn tickets by playing competitively. Tickets can be used to purchase Golfcraft wearables. Some Golfcraft wearables increase boost, which helps players earn more XP and coins for their time spent playing. In this sense, wearables in Golfcraft serve a similar purpose to armor in Minecraft and Runescape. They are purchased by players using in-game currency (tickets) and used to compound in-game wealth. Diamonds serve a similar but slightly different function.

Diamonds are randomly awarded to Golfcraft players for simply playing the game. Players must spend diamonds to upgrade their clubs’ attributes: power, control, and aim. Upgraded clubs are worth more on the secondary market because they have greater utility to players in-game.

The key differentiator between play-to-earn games like Golfcraft and legacy games like Runescape is that they leverage technologies which allow players to easily move value off-platform. Because golf craft wearables and clubs live on-chain as NFTs, they can be easily transferred to third-party marketplaces like OpenSea and sold for MANA, the native currency of Decentraland. Players can then exchange MANA for FIAT currencies like the US dollar which have greater utility in the physical world.

This was one of the most critical features missing in games like Minecraft in Runescape. Players would spend hundreds of hours grinding to generate in-game assets like diamonds and armor. These items effectively served as stores of value in-game thanks to scarcity and utility, but their value was not easily transferrable into the real world. These items were not good mediums of exchange outside of their respective virtual worlds.

Historically, players have been limited by the rules of siloed metaverse platforms that lacked interoperability with each other. Now, thanks to blockchain technologies like NFTs and cryptocurrencies, players are finally able to extract real-world value from their virtual assets.

Third party marketplaces like OpenSea already enable players to buy and self Golfcraft clubs. It is only a matter of time before players will be able to derive value and utility from these clubs in metaverses other than Decentraland.